#BoikotIndosat Viral in Social Media, this is Indosat Ooredoo’s Statement

Yesterday, social media in Indonesia especially Twitter enlivened with issue #BoikotIndosat voiced by some netizens. In our search, this issue started when one of Twitter user @UlinYusron posted information related to one of Indosat’s employees whose Facebook status was considered full of scorn on the government by providing screenshot proof. The employee is Rico M Ferajab, Manager of Business Intelligence & Reporting Indosat Ooredoo.

The tweets then became viral and mentioned to Indosat accounts, including to CEO Indosat Ooredoo Alexander Rusli. He immediately responded via Twitter account @ alexanderrusli by declaring as a company, it does not tolerate at all against employees who are anti-NKRI (The Unitary State of the Republic of Indonesia). Furthermore, Alex also writes that it is now in the process of corridor corporation and law.

Alex Rusli also responded to questions from netizens regarding the case and stated that this is not a hoax. “The steps have been taken.As stated separately, we are not tolerant of staff who prove to be inconsistent with the state and government,” wrote Alex. 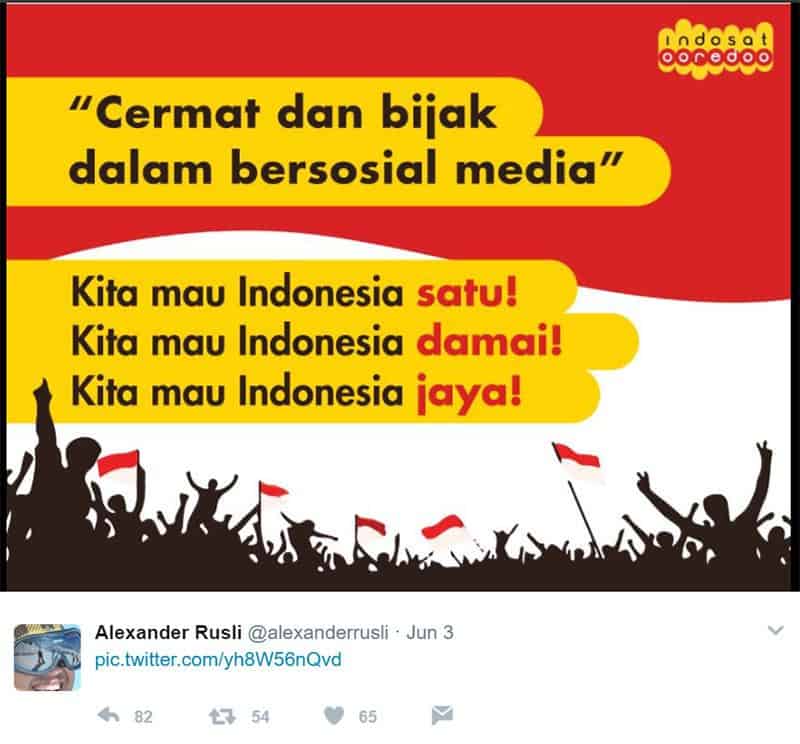 Indosat’s move seems to have a negative reaction by some netizens. They echoed the #BoikotIndosat hashtag as a form of protest.

Due to the increasingly tightly related issues of #BoototIndosat launched by netizens, Indosat responded immediately. The mobile operator of Ooredoo subsidiary (formerly Qatar Telecom) makes the clarification. Here is the official statement of Indosat Ooredoo:

Related to the Wise Dissemination

Indosat Ooredoo is a company that always adheres to all applicable laws and regulations in Indonesia. Internally, the company also consistently implements good corporate governance in its business activities.

Indosat Ooredoo stands in Indonesia to provide services to the public and support the Government of the Republic of Indonesia in its development through technology and communication media in accordance with the 1945 Constitution, Pancasila and applicable laws and regulations.

The Company respects the right of every employee in the opinion, as well as channeling political aspirations. Any personal opinions and political aspirations of the employees are the responsibility and privacy of each person, including the disclosure and dissemination of it in the social media, but it is noteworthy that it must comply with applicable ethics, rules and regulations and support the unity of society and nation.

The delivery of political opinions and aspirations by Indosat Ooredoo employees in social media is the rights and responsibilities of the individual concerned, and has nothing to do with the company’s attitude. Indosat Ooredoo has an internal mechanism that explicitly calls all employees to be wise in using social media.

Collective Employment Agreements (CLAs) which are internal guidelines firmly prohibit employees from spreading provocative or inciting content or information. Indosat Ooredoo employees are also not allowed on behalf of the company and use corporate attributes of any kind when expressing personal opinions in social media, as well as on political activities.
The Company also actively and periodically reminds its employees of company regulations and appeals regarding this matter.